In a word – awesome! Today was the designated sightseeing day for the YOM trip to Nicaragua.

Before we left the hotel, we were ministered to by Cecilia Thornton who gave a short devotion to the YOM team. We had a time of prayer and then we departed for a big day of sightseeing and fun.

Our first activity was the zip-line adventure over the jungle in the city of Managua. However, because of a meeting of Central American leaders to discuss the unrest in Honduras, federal police and military had blocked off the area of the city that our activity was located within. We were able to improvise and go to a different zip-line location in Granada. Each YOMer strapped on a harness and zip-lined 50+ feet above the ground through the jungle. It was a blast! Only the photos and personal stories can truly relate the fun we all had doing the zip-line adventure. 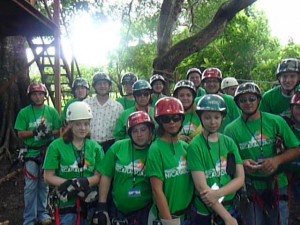 Next, the YOM team went out to lunch at a great “lookout point” over the jungle and a huge lake formed by a volcano. We ate a tasty meal and were entertained by a small local band that played some Nicaraguan music.

We then traveled to Lake Nicaragua (an enormous lake over 100 miles long and the only place in the world where there are freshwater sharks) and took a boat tour of the lake, bouncing between small islands formed by a volcanic eruption over 150 years ago. One of these islands was called “Monkey Island”, where monkeys jumped onto our boats and ate out of our hands. Once again, only the photos and personal stories can do justice to the Monkey Island and boat tour experiences. The scenery on the lake was beautiful beyond words. 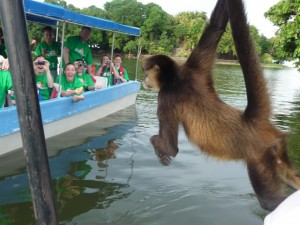 When we left the lake, we headed back into Granada and visited a nice coffee shop where YOMers together enjoyed desserts and coffee. We went back to the hotel in Managua and chilled out, resting up for a very full day tomorrow.

Photos from this extraordinary day can be viewed at http://picasaweb.google.com/MOYouth09.